Late last year the United States officially recognized “cyber” as the 5th domain of Warfare, officially joining more traditional venues such as land, air, sea and space. The  move came as a countermeasure to the international declarations of others, including Russia’s announcement of the formation of a new “informational warfare” military unit months beforehand. 2017 and 2018 have also seen many different people, parties and countries around the world take bold new stances in regards to cyber Warfare. This includes the German Armies formation of a new Cyber Command unit, NATO’s re-classification of the internet/cyberspace as a domain of Warfare, the United States attempts to re-classify US-CYBERCOM as a military unit and global leaders calling for the drafting of a new “Digital Geneva Convention” – specifically to draft a new set of internationally recognized rules, guidelines and standards governing informational/cyber warfare into the future.

I bring this up because I have recently come across several studies that I find particularly interesting. The first is a study from Venafi, finding that 86% of American based Informational Technology workers believe that the world is currently at “Cyber War.” Breaking down the study a little further, according to the same research, 88% of those same IT workers believe that attacks which disrupt election infrastructure technically constitute acts of war. This includes things such as attacks against election infrastructure, voting machines and “machines that transmit, store, tabulate and validate electoral data.” Moreover, 86% believe that misinformation campaigns designed to manipulate public opinion for political outcome/gain also constitute acts of cyber war. Interestingly enough, 40% of IT professionals believe that cyber war already has and is actively costing human lives, only 3% of respondents believe that it is impossible for people to die from cyber wars/attacks.

The US Monday joined Russia, North Korea and China in declining to sign a cyber-security pact https://t.co/wBTesO0a8v supported by 50 countries and aimed at fighting both cyber-warfare and cyber-crime.

The second study was conducted by researchers at The Military Times, an American based military news outlet. According to a poll of thousands of active Duty military personnel, almost a half of all soldiers and commanders in the US Armed Forces, 46% to be exact, believe that the United States will be drawn into some sort of large-scale armed conflict in 2019 – though they did not specify where or whom with. However, 89% of those same respondents stated that cyber attacks/terrorism represent the single greatest risk to the country at the same moment in time, and 71% state that Russia is the US’s single greatest enemy – up 18% from 2017. 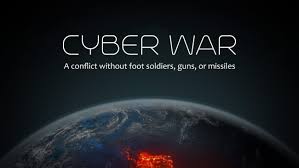